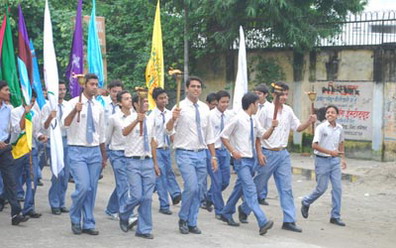 Boys’ School —  The Group’s second building was constructed in 1988 and was named after the co-founder Mrs. Virginia Wilson. This is now the boys’ section of the school from class V to XII. The total strength of this branch alone being nearly 1000 students. The exceptional feature of this branch include a vast library, a fully equipped computer department with facilities including multi-media studies, broadband Internet facility, a badminton, volleyball and basketball court.

Virginia Block is the Head Office of the Group. The Group Director’s office, the Accounts office and HR Department is located in this branch. Co-ordination of the whole Group is done from this Block. Virginia Block also holds a second shift in the afternoon and this branch is called the Extension Branch.

Boys’ School (Campus) —  Wilsonia Boys’ School is situated in the building known as Virginia Block. Constructed in 1988, this modern building is situated in the heart of the city in Civil Lines. With Three floors, the building is roomy and spacious enough to accommodate the strength of over 1000 students. The Library itself being big enough to accommodate 150 students at a time.

The school follows the courses prescribed by the Council for the Indian School Certificate Examination, New Delhi.

It is the institution’s endeavor to provide a broad and liberal scope of education. So along with the traditionally taught subject viz. English, Hindi, Mathematics, Science, History and Geography, the school also teaches Art and craft, Accounts, Commerce, Classical and Western music. Indian classical music is compulsory for all girls. Sanskrit or Urdu are taught as the third language up to class VIII.

In conformance with the school’s focus of promoting correct values, Religious and Moral education forms an integral part of the curriculum. Moral Science classes are held from Nursery to VIII. A short worship service is held every morning during Assembly and is compulsory for all students.

General Knowledge is a part of the curriculum till class VIII.

No exams are held up till class IV. Promotion is based on class performance and marks scored in the periodical unit tests.

Two streams of courses are offered in both class X and class XII.

1) Class X – Choice is given between Sciences (Physics, Chemistry, Mathematics and Biology) and Commerce. The rest of the subjects are compulsory viz. English, Hindi, Social Studies (History/Civics and Geography), Environmental Education and a sixth subject which can be either Commercial Application or Computer Application. (Commerce students will be permitted to opt for Economics in place of Mathematics if they so desire).

2) Class XII – English & Environmental Education are compulsory for all students.

Registrations for new admission are done at the end of each academic year, generally in the months of January and February. In order to register a candidate the following information must be supplied-

1. Name of the Candidate.

3. The latest progress report of the last school attended.

After the above requirements have been submitted to the entire satisfaction of the Principal, the student’s name will be registered on the Waiting List for the class applied, after the payment of the registration fees.

Registration of candidate does NOT guarantee admission to the school. The dependencies for the admission can be found from the school prospectus.

The Principal reserves the right to refuse admission if the transfer certificate is not received on time, or if some flaws are found in the same. Under these circumstances the parent will forfeit the amount deposited towards admission fee.